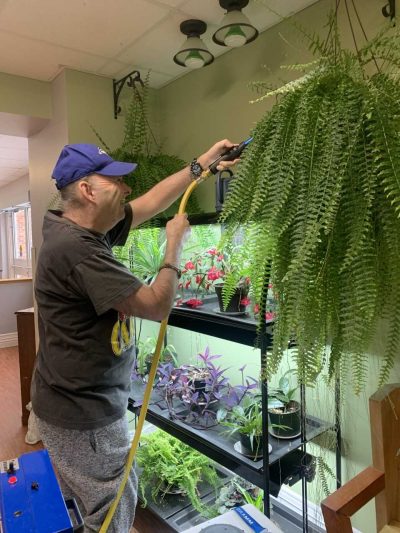 We recently wrapped up a certified adapted Montessori training session with a wonderful group of people from the R.K. MacDonald Nursing Home in Antigonish, Nova Scotia. What an engaged group! The passion for their work was evident right from the start. And we see how they work to improve residents’ lives.

After the training, one of the staff members, Shantel, a Therapeutic Recreation Programmer with previous Montessori training who thoroughly embraces this philosophy in her work with the residents, shared one of her success stories with us.

It’s about a resident named Gerard who recently moved into the Home. Shantel identified this resident as one who would likely benefit from what she had learned.

There are many beautiful plants spread throughout the home, and every Monday and Thursday, they are all checked and watered if necessary. It’s a big job!

Shantel sensed that Gerard might have some interest in this task, so one Monday she asked him if he would like to help her. He agreed.

As other residents in the Home had previously been shown how to operate the watering machine, Shantel felt this was a task Gerard could tackle with a little cueing.

The two of them completed the pleasant task together. Gerard showed great interest and really seemed to be enjoying the activity.

After they were finished, Shantel told Gerard that she had to go around the Home every Monday and Thursday morning to care for the plants and she really could use some assistance.

She then asked if he would be interested in the “job” of assisting her.

He jumped at the opportunity! His reaction showed just how much he had enjoyed the activity and how ‘spot-on’ the staff member had been when choosing Gerard for this particular activity.

After he accepted the “job,” Shantel let him know that there may be times when the watering machine wasn’t available and he could just use one of the regular watering cans that were placed throughout the building. She posted visual cues to help him in case he had difficulty finding the machine or the watering cans, etc.

Gerard is now spending his time on meaningful and purposeful activities. He’s doing some regular tasks in his room as well, but his main activity is caring for the wide variety of plants on display throughout the Home.

It’s important to note that the “job” is not only to water the plants but to check first and only water if necessary, expanding Gerard’s activity.

He seems to be very proud of the job he’s doing. He enjoys showing people what he’s doing and telling them all about it.

This task is really helping Gerard settle in to his new Home and feel more comfortable talking to all his new neighbours and the staff as he happily shares what he has been doing. Thanks Gerard!

Register for Certified Intensive training in the adapted Montessori method.

Find out how to become a Montessori Inspired Lifestyle® credentialed residence.