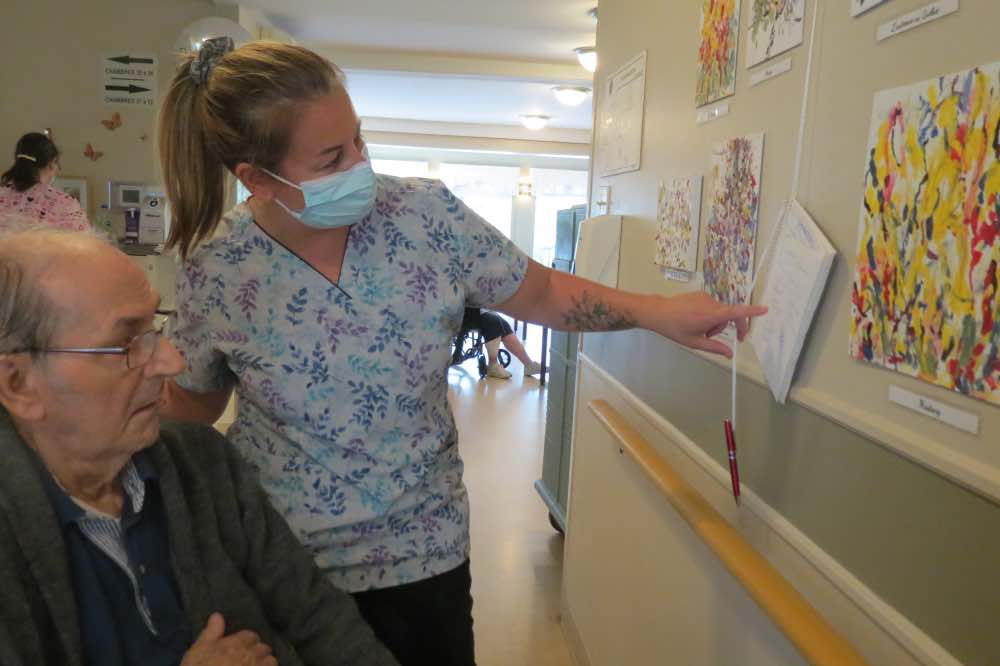 André, a new resident at an assisted living home in Quebec, was lonely and unhappy due to the loss of his wife and difficulties caused by Parkinson’s disease.

During a casual visit with André, a staff member asked him about his past. She encouraged him to share his life history.

As you’ll see, her interest in André’s life history is what helped him regain his zest for life… a fulfilled life.

The staff member discovered that André had been a painter and had enjoyed it very much. She thought that he could easily paint again, despite his Parkinson’s symptoms. She decided on a course of action, knowing that accomplishment brings real happiness and well-being.

The staff member gathered the materials André would need – brushes, pots of paint, and a canvas. André was delighted and started painting immediately.

When he completed his first painting, he asked for another canvas. André expressed an interest in exhibiting his work, so the staff member introduced him to a recreation worker.

André had given each painting a title and explained to the recreation worker what each of his ten paintings represented.

To arrange the set up of the exhibit, the recreation worker had each title written on a separate document and laminated.

Using measurements of the canvasses, they made paper templates to arrange the exhibition on the wall and took a picture so they could get André’s approval before placing the actual canvasses on the wall.

They created an attractive poster with the picture and name of the artist.

Visitors enjoyed viewing the exhibition. Many signed and made comments in a guest book, and some purchased paintings!

André regained his appreciation for life. Although he has only been living in the residence for a few months, he is already engaged and feels in control of his life.

The results of this project were astounding. It brought happiness to all concerned and, once again, proved the tremendous benefits and value of applying the adapted Montessori method, particularly in residences for seniors.